What Would Jesus Do in Ferguson, Missouri? 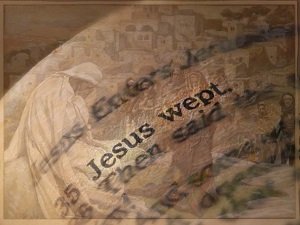 Two days ago the grand jury in Ferguson, Missouri, made known their final decision: no criminal indictment against the police officer involved in the shooting death of Michael Brown.

And the rioting began in earnest.

People on one side say that all the evidence was evaluated, the legal system has spoken, and that should be the end of it. People on the other side say it’s not about a single incident: it’s about centuries of oppression and pent-up anger, and violence is the only way to make their voices heard.

What would Jesus do if He were on Earth today, in Ferguson Missouri?  Those on both sides of the conflict believe they would have Him on their side.

But I’m not sure that’s true. There were serious social issues in 1st century Judea and Galilee when Jesus was here. Violence, oppression, and exploitation (including rape) by the Romans was everywhere. The religious establishment was rife with greed, violence and oppression as well. Slavery was an every-day part of society. Women were mostly considered property. There was little opportunity for education or advancement for the common poor people.

And what did Jesus do? He went after people’s hearts.

So what would He do today in Ferguson, Missouri?

But He would not join sides. When approached about those who had died because of political violence or accidents Jesus responded, “Unless you repent, you too will all perish!” (Luke 13:1-5)

And then, Jesus would call to action.

But not violent protest where property is destroyed, and people are hurt. Not authoritarian tactics to force people to comply. Neither of those responses has any chance of changing people’s hearts.

And hearts is what Jesus is after.

Jesus would call all people to personal (and group) accountability. Each one will have to answer for themselves before God (Romans 14:12).

God cries when any of His children is hurt.

And God calls each of us – rich, poor, young, old, every race and color – to a life where each heart is changed and each person makes a positive impact for His kingdom.

What is He calling YOU to do?

Your Turn: What do you think Jesus would do if He were in Ferguson, Missouri right about now?