Being WITH is Not Enough: What Comes After “God With Us” 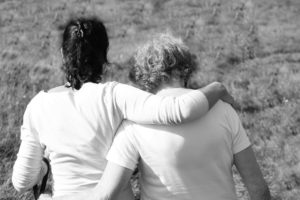 Jesus came to be “God With Us.” He responded to our hopeless situation not by shouting truth at us, but by coming to be With Us. And when we connect with someone who is hurting we too must be with them instead of preaching at them.

Several of you responded to my article about “God With Us” last week.

The people who encountered Jesus could not help but be impacted by Him. His very presence called them to a different kind of life. And when they stopped long enough to hear His words their hearts burned within them. (See Luke 24:32)

Yes, the outcasts, the sick, the poor, those nobody else wanted were drawn to Jesus. He healed them, touched them, loved them, gave them hope. But being with them didn’t mean Jesus became like them and stayed with them in their misery. He called them to something more.

And He had something for those who were not so sick or broken. They too felt the call to something more, something perhaps harder and more dangerous than they ever imagined they could be a part of, something exhilarating and profound and alive.

Once Jesus is with us, He leads us out. He doesn’t simply soothe us in our brokenness, assuring us everything will be OK. Far from it! Instead, He goes before us leading the way to the greater thing He has called us to. (See John 10:4)

First He is With Us. Then He leads us out.

The order is important. We will not, cannot, follow Him until He is With Us.

But once He is With Us, we are called to follow Him. We cannot, dare not, stay the same. He calls us to a life of transformation, character growth, maturity, meaning, purpose, and service. END_OF_DOCUMENT_TOKEN_TO_BE_REPLACED

God With Us: When “Truth” Doesn’t Matter

Someone has hurt you – badly. Or you face a really tough decision. Or something happens to rock you to your very core. You take the risk and tell one of your church friends, and they respond, “I’ll be praying for you.”

And you want to SCREAM!

It’s not that praying is bad. It’s good. Very good. But it’s like they expect offering a prayer takes them off the hook. They can feel they’ve done their Christian duty while you’re left dying under the crushing load.

When your spouse walks out you don’t need someone to quote Scripture to you. When you just found out your son or daughter is sexually active with a same-sex partner you don’t need to be encouraged to go to church. When you just heard the word “cancer” from your doctor an “I’ll pray for you” doesn’t go very far. When your spouse or child just died a pat on the back with a “God will be with you” is just empty.

I’m on a bit of a rant today. I’ve recently been touched by two different Christian friends whose marriages were lost through no obvious fault of their own. I’ve wrestled with my own healing from grief after the loss of my husband Al a few months ago. And I’ve heard a few truly ugly stories from you, my readers, about what look like truly impossible situations.

At such times the standard Christian platitudes just don’t work. It’s not that they’re wrong; it’s that they’re not enough.

One of my friends was tearful after sharing a moment of his pain, and I responded: “If the gospel can’t deal with this, then what good is it?!”

What is the kingdom of God really all about? Why did Jesus come here? Why are we trying to live this Christian life anyway? END_OF_DOCUMENT_TOKEN_TO_BE_REPLACED

You could handle the little things, or so you tell yourself. You could pick up his dirty clothes now and then, or overlook the times she forgot to tell you about a purchase she’d made. But this time it’s really BIG. Your spouse has messed up badly. It’s all you can think about, and you’re not sure you can live with the consequences.

We’re talking about such BIG marriage problems that your relationship is truly threatened. Little ongoing frustrations may eat away at you, but those are for another time. This is about the BIG stuff.

Your mind is swirling. How could they do this to you? Shouldn’t you have seen the red flags earlier? Aren’t you supposed to forgive people, even your spouse, when they mess up? How could you ever do that? Hurt, confusion, anger, fear, despair, guilt, shame – it’s overwhelming.

One article such as this can’t tell you everything you need to know about dealing with such BIG marriage problems. But I can give you a framework for the questions to ask and the ways to think about what to do next. You can use these steps to get clarity about your marriage situation and about the actions you may need to take.

If Your Spouse has Messed Up Badly:

No sugar-coating the truth; it’s time to face reality. END_OF_DOCUMENT_TOKEN_TO_BE_REPLACED

How to Find Healing: It’s a Choice

Healing is not something that simply happens to you. Instead, it’s something you work toward, search for, and live out. It’s up to you to find healing.

That may sound heretical if you’re a believer who is praying for God to heal you – in your physical body, your troubled mind, your broken relationships, or your wounded spirit. It’s hard to hold onto faith that healing is even an option. And perhaps you wonder why others seem to experience it – and you don’t.

Think of it similar to salvation. There’s nothing you can do to earn salvation; it’s a free gift from God. But that doesn’t mean you’re saved aside from your choice – and your voluntary response to God’s offer. You have a part to play in taking His offer of salvation into your being.

Or think of it like food. You don’t create food out of nothing; God supplies the food, but He doesn’t drop it into your mouth. You’re responsible for learning what you need, finding it, preparing it, and eating it. If you don’t, you’ll get awfully hungry!

And that healing affects everything; your physical body, your mind, your relationships, your inner spirit.

But that healing isn’t some magic spell that comes on you. It’s something you choose, seek out, and actively work to receive. END_OF_DOCUMENT_TOKEN_TO_BE_REPLACED

What to do if you Feel Unloved

You want to be Number One to someone. Perhaps you never felt that from your parents, and you desperately hoped – expected – that you would find that in a spouse. But the right person hasn’t come along. You keep secretly hoping you’ll meet The One before it’s too late, but it’s not looking real good for you right now.

Or you’re married and you’ve discovered that a ring on your finger doesn’t mean you’re Number One to someone in the way you had hoped. You’re disappointed. Why do you feel so lonely and unloved? Wouldn’t your spouse treat you differently if they truly loved you? This Marriage Misery is worse than being single! At least in that case you wouldn’t have your hopes raised – and then squashed into nothingness.

I so badly wanted to be Number One to someone for many years. I was outwardly successful, had friends, and experienced quite a lot of freedom and joy – but I was alone. Some of the people around me were nice enough, but nobody loved me. Not really. Not for me, the whole of me.

Does “God Loves You” even apply to you?

You might say, “That’s just sour grapes. God loves you. And that’s enough.”

You’re right – God loves me. And you. But how does that become enough? END_OF_DOCUMENT_TOKEN_TO_BE_REPLACED