Suffering in marriage is common. I’m honored to be posting over at To Love, Honor, and Vacuum. Thank you, Sheila Wray Gregoire, for the opportunity! I hope you’ll check out all Sheila has to offer, and read the full post there. 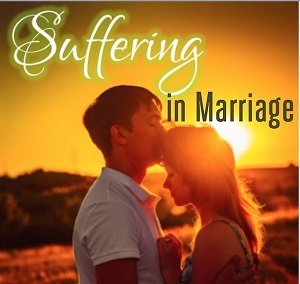 Marriage isn’t supposed to be about suffering, is it?

There may be a few marriages where everything goes smoothly and life is truly “happily ever after,” but truthfully I haven’t known any marriages like that. I considered my marriage very happy, happier than most, but it was not devoid of suffering. But it was actually those challenging aspects that brought me the greatest satisfaction and became the most valuable.

Suffering in marriage is a touchy subject. That idea may immediately bring up thoughts of abuse, control, manipulation, addiction, violence, and any number of other painful and destructive ideas. I just want to get this out of the way right now: those behaviors are never OK. Never. Period. End of story. If there is abuse, manipulation, or violence going on in your marriage, get some help now!

But there’s a whole other aspect to “suffering” that is much more common, perhaps universal.

As human beings we are basically selfish, and when two selfish people become joined in marriage there is certain to be suffering.

You are certain to be hurt if you get close enough to someone, and you are certain to hurt them also. And life has a way of bringing its own suffering in a thousand different ways. It’s not a matter of if, but of when. But it’s what you do next that really counts.

Suffering can crop up in many different ways. Your spouse wants sex when you don’t, or you want sex when your spouse doesn’t feel up to it – over and over again. Your spouse develops a serious illness. Your teenage child gets involved in drugs. Your baggage or your spouse’s baggage from your family of origin spills over into your life now. You’re forced to choose between a job you love and doing what’s best for your marriage or family.

Your suffering may be larger or smaller than someone else’s, but it feels really heavy – and probably unfair.

I hope you’ll check out the rest of this post over at To Love, Honor, and Vacuum. There I talk about how to tell the difference between “good” suffering and “bad” suffering. I’d love to see your comments and questions.

From Genesis to Revelation: The Greatest Love Story Ever